From the forests, to the ocean, to the sand and the sky, you can discover an amazing variety of native wildlife in Lincoln City.

Sea Stars
Commonly called starfish, these spiny-skinned invertebrates eat clams, oysters, fish and other animals with the mouth on the underside of their bodies. They can have as few as five legs or upwards of the double digits.

Whales
Migrating along the Oregon Coast to and from Baja, Mexico, Pacific gray whales can be spotted from any elevated location in the early morning. They can be seen frolicking in the water—hopping or breaching into the ocean air.

California Sea Lions
Up and down the North American Pacific Coastline, sea lions are very social and often rest together in tight groups. Males can reach up to 850 pounds and seven feet in length. Pups are typically born in June or July.

Harbor Seals
While awkward on land, these adorable marine mammals are very graceful while gliding through the water. Harbor seals can weigh approximately 300 pounds and be as long as six feet. A large colony can be spotted on the Salishan Spit in Siletz Bay and viewed from the SW 51st Bay access. Pups are born in the spring, and while very cute, should not be approached or touched—for mom is often just offshore hunting for food and will be returning shortly. If she views a potential threat near her baby, she may abandon it to save herself. For questions about marine mammals on shore, contact the Oregon Marine Mammal Stranding Network at 541-867-0202 or by visiting mmi.oregonstate.edu/ommsn.

Otters
Sea otters can be hard to find on the Oregon Coast—however, their close cousins, River otters, play and thrive in the tributaries flowing into the Pacific. They can be found near the Siletz River and Schooner Creek in south Lincoln City, the Salmon River on the north end of town and occasionally in Devils Lake.

Roosevelt Elk
These majestic creatures are the largest of elk species, weighing in at up to 1,000 pounds. Their herds can be found in pastures and on Cascade Head north of Lincoln City or near Devils Lake.

Oregon Silverspot Butterfly
With a golden base to their wings, ribbed with lines of black and dotted on the underside with teardrops of silver, the Oregon silverspot butterfly spurred the move for the Cascade Head Nature Conservancy, when it became an endangered species. A captive rearing program was initiated in 1999 to increase the likelihood of the species recovery. These butterflies can be found on Cascade Head, flitting from flower to flower and collecting nectar.

Black-Tailed Mule Deer
These tawny ungulates do not migrate and can be found living in the neighborhoods and yards of Lincoln City, even occasionally swimming in the waters of Devils Lake.

Western Sandpiper
The most common migrating shorebird on the Oregon Coast. With dark legs and a thin dark bill, they can be found on the mudflats, beaches, shores or lakes, where they feed on insects and crustaceans.

Western Snowy Plover
This white and tan shorebird nests on open sandy beaches and dry mudflats on the southern and central Oregon Coast. They were listed as threatened in 1993, declining primarily from habitat loss.

Bald Eagle
Removed from the endangered list in 2007, these birds live in a variety of locations on the Oregon Coast, including stands of trees near Siletz Bay and on Devils Lake. Their white heads and eight-foot wingspan make them easy to spot.

Osprey
These birds are hawks with white bellies and dark brown wings live in forested areas near lakes, rivers and the ocean and exclusively eat fish. Ospreys are frequently seen in Siletz Bay, the Siletz River, Devils Lake and areas of south Lincoln City.

Bufflehead
Black and white with purplish-green throated diving ducks that feed on fish and plants, they travel a long way under water in search of prey. Their populations have declined significantly from habitat loss. They can be found on Devils Lake and Siletz Bay.

Wood Duck
Wood ducks are striking because of their colorful sculpted appearance. They are cavity nesters, often using nest boxes provided by humans. They can occasionally be found on Devils Lake.

Pelagic Cormorant
These birds are found year-round along the Oregon Coast. They nest in colonies off cliffs and ledges. The colony at Cape Foulweather, about 10 miles south of Lincoln City, is one of the largest on the Pacific Coast.

Tufted Puffin
Nesting on coastal rocks in colonies where soil-topped inland exists, these puffins winter at sea and thus are often hard to see. The best view in the area is at the Oregon Coast Aquarium in Newport.

Western Gull
The largest population on the Oregon Coast year-round. They are aggressive scavengers, including for the sandwich you just brought outdoors, so keep a close eye on them. They are also ever-present voyeurs at oceanfront restaurant windows.

Brown Pelican
Of the seven species of pelicans, the endangered brown pelican is the only dark one and the only one that plunges from the air into the water to catch its food. Brown pelicans can be seen spring through fall on the ocean and in Siletz Bay.

Great Blue Heron
These are large, long-legged stately blue-grey birds that inhabit saltwater areas such as Siletz Bay, they move slowly but strike quickly when they spy prey.

Oregon Coast Aquarium
Immerse yourself in the mysteries of the ocean. Exhibits range from those you can touch and hear to those you can see and explore. Experience the ethereal magic of jellyfish and the magnificent colors of the many varieties of fish. Watch sea otters, harbor seals and California sea lions.

Whale, Sealife & Shark Museum
Specializing in gray whales, this small museum features exhibits and collections from marine biologist Carrie Newell. Learn about sea lions to shorebirds, even sharks. It also offers whale watching tours for the experience of a lifetime. 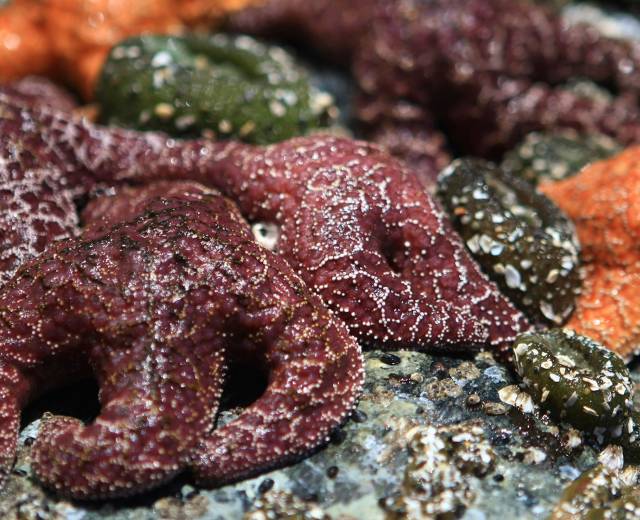 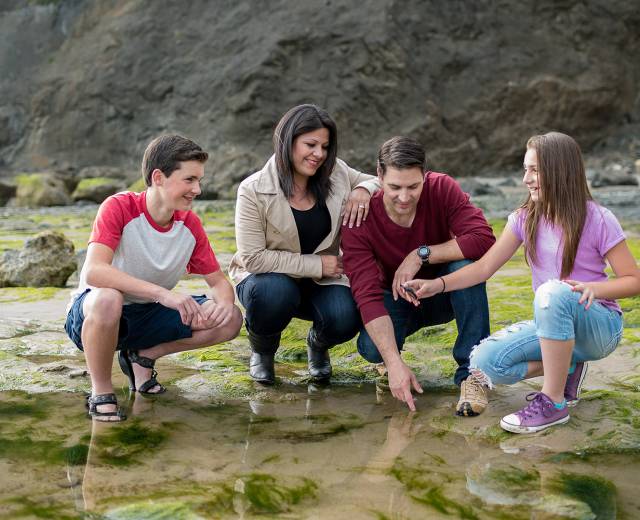 Beachcombing Treasure hunters can find agates, shells, sea creatures and, of course, our famous hand-blown glass floats hidden all along the beach. 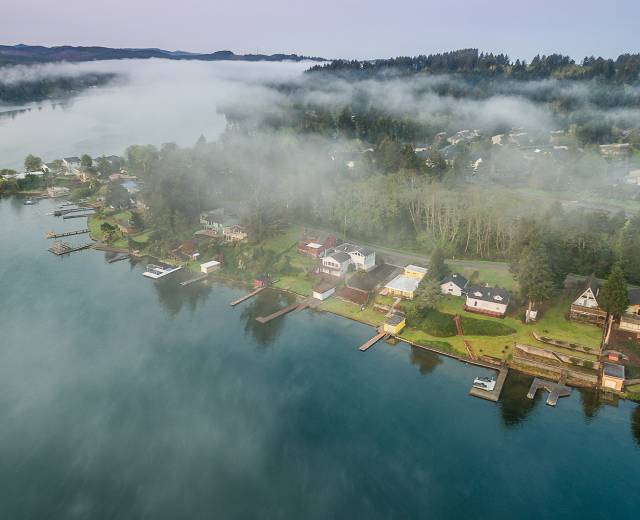 Devils Lake Devils Lake is 685 acres of serene water on the east side of Lincoln City, connected to the Pacific by the “World’s Shortest River.”