Effective January 1, 2021, Lincoln County is under a "High Risk" category designation for reopening. This means that additional restrictions are in place at this time, which may affect businesses, attractions and services.

Meet some of the kitchen wizards who make the magic happen at the Culinary Center in Lincoln City.

Culinary Center Manager
Donna Riani is the manager of the Culinary Center in beautiful Lincoln City. Donna came to the Oregon Coast on vacation and decided to call it home in 2012. Donna has been in the restaurant business since the age of 16. Her first job was in an Italian restaurant in the Chicagoland area. She has also been a professional baker in Colorado and Illinois, where she developed and implemented training programs to teach students how to bake. Now at the Culinary Center, her position has allowed her to combine her two loves: food and teaching.

It is Donna’s mission to educate visitors about where their food comes from and how it is raised and prepared. It’s also about cultivating relationships with local food purveyors. We really are what we eat! Donna’s goal with every class is being able to teach someone a new technique or recipe and have them say, “I can do that.”

He was the executive chef of Salishan Lodge from 1985 to 1999, and during his tenure the Lodge’s fine dining restaurant received the AAA 4 Diamond, and Mobil 4 Star Awards (the only restaurant in Oregon to do so,) as well as the DiRoNA Award. Chef Pounding was also selected as one of the top ten chefs in the Pacific Northwest by NW magazine.

Rob is a graduate of the Culinary Institute of America and a Certified Executive Chef, and was selected as a member of the American Academy of Chefs, the American Culinary Federation’s honor society for excellence in culinary arts and contribution to the profession.

Rob has spent many years developing working relationships with various market gardeners, farmers and fisherman on the Oregon Coast, and he has been an active supporter of sustainable agriculture and organic farming for commercial applications in Oregon.

Rob was selected to prepare a dinner at the prestigious James Beard House in New York. He has been involved in numerous promotional events, including guest chef at the Hotel Furama in Central Hong Kong, guest chef at the US Embassy, Hong Kong, and Chef Exchange at the Hotel Fregate, Bandol, France. In 1996 he was asked to develop a series of menus featuring foods and preparations from the Pacific Northwest for the restaurants at the prestigious American Club in Central Hong Kong. Rob is active in various hunger relief efforts, including Lincoln County Food Share and Share Our Strength.

Chef Pati has been a passionate home cook for over 30 years, making dinner (along with her husband, Bruce Birt) using fresh, whole foods almost every night of the week. Her interests are varied, but her favorite style of cooking is Mediterranean. She shops the Lincoln County farmers’ markets for as long as they run, buys as much food from local producers as she can, and supports the buy local, organic, sustainable and Slow Food movements. Pati loves the variety of coastal seafoods available at the fish markets or purchased directly from the fishermen right off their boats. Pati believes that knowing where whole foods come from, cooking with fresh, seasonal ingredients and eating together at the table are all part of healthy living.

Pati is a graduate of the Italian Culinary Academy (the Italian culinary program offered through the French Culinary Institute) in New York City. She spent five months in Italy learning the secrets of Italian cuisine and enjoys sharing them with her clients.

Writer, Teacher and Editor
Linda Ziedrich writes about food and rural life from her farmstead near Scio, Oregon, where she continually experiments with the produce from her orchard and large garden. The Joy of Pickling, The Joy of Jams, Jellies, and Other Sweet Preserves, and Cold Soups are the fruits of her empirical research as well as her studies of culinary traditions around the world.

Linda has worked as a nonfiction book editor for 30 years. The many titles she has edited include cookbooks such as Hiroko Shimbo’s Japanese Kitchen and Teresa Barrenechea’s The Basque Table.

Linda met Chef Sharon at the International Association of Culinary Professionals (IACP) conference in Portland, Oregon, in the Spring of 2010. Sharon was getting her copy of The Joy of Pickling signed, and figured out that Linda was “the one” to teach pickling and canning classes at the Culinary Center. She has been a regular every fall since.

Olde Line Lanes
Ethan Granberg is co-owner and chef of Olde Line Lanes in Lincoln City, Oregon. Born and raised in Pittsburgh, Pennsylvania, Ethan has been on the Oregon coast since 2010. A graduate of the Pennsylvania Culinary Institute, Ethan gained his kitchen “chops” in small independent restaurants in Pittsburgh. Once in Oregon, Ethan started as executive sous chef at the Inn at Spanish Head. Coming to the Pacific Northwest ignited in him a passion for cooking local, seasonal and casual foods. His outlook brought him to take a position at Les Cave Bier & Kitchen in Corvallis, where local food made from scratch is standard operating procedure. Now Ethan is back on the coast running, with his wife, Danelle (bread baker and pastry chef), Olde Line Lanes in Lincoln City.

Culinary Classes & Events From hands-on courses to delicious demonstration classes, the Culinary Center can show you how to make anything from pasta to dim sum. 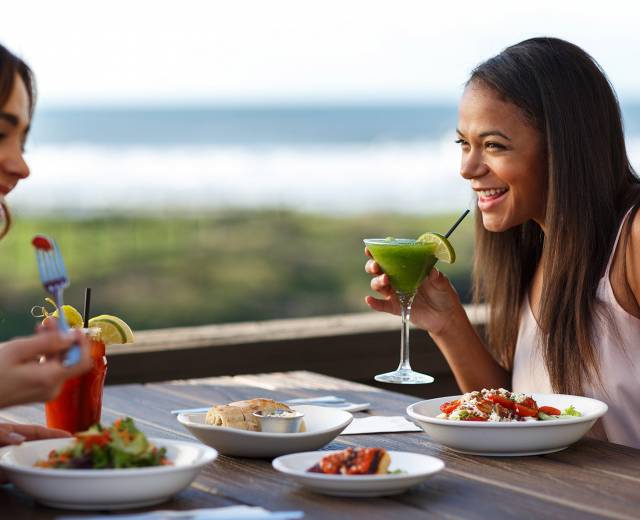 Where to Eat Take your taste buds on a dining adventure ranging from Pacific Northwest specialties to ocean-to-table to international fare and barbecue.

Culinary FAQs Have a question about the Culinary Center? We have answers!