Walk up the narrow metal spiral staircase until you reach the summit, where you’ll find a giant, gleaming light wrapped in glass and mirrors.

Among the 11 Oregon lighthouses, five are a short drive from Lincoln City, with stories waiting to be told and histories waiting to be discovered. Tall sentinels that once guided stalwart sailors away from rocks in the night, a light in the dark, wrapped in history and ghost stories—there are 11 lighthouses along the 363 miles of the Oregon Coast, each beckoning you home.

Cape Meares
Although it’s the shortest lighthouse on the Oregon Coast, Cape Meares Lighthouse is no less spectacular than its neighbors, standing at 38 feet high, with an original Fresnel lens made in Paris, France. In its heyday, the light from Cape Meares could be seen 21 nautical miles out to sea. The lighthouse is free for tours and features a gift shop and interpretive center.

Yaquina Head
At 93 feet tall, Yaquina Head Lighthouse is the tallest in Oregon and is still in operation today, on the north end of Newport. Although the original oil burning Fresnel lens has been replaced by one that runs on commercial power and the lighthouse keeper gone, the 1800s history of Yaquina Head shines on. This lighthouse features tours and an Interpretive Center that tells the story of the lighthouse and the surrounding natural area.

Yaquina Bay
A sister lighthouse to the Yaquina Head Lighthouse, Yaquina Bay sits atop a bluff at the mouth of the Yaquina River. It was officially restored and privately maintained for navigation in 1996. Believed to be the oldest structure in Newport and the only existing Oregon lighthouse with living quarters attached, Yaquina Bay is still functional, shining a steady white light from dusk to dawn, 161 feet above sea level. The lighthouse is open to the public for tours and features an interpretative center.

Heceta Head
South of Yachats, perched on a bluff 150 feet above the Pacific, Heceta Head Lighthouse keeps vigil with one of the brightest lights on the coast, casting out 21 miles to sea. At 56 feet tall, Heceta Head also offers a bed and breakfast in the historic lighthouse keeper’s house, as well as tours and an interpretive center.

Cleft of the Rock
A privately owned lighthouse that provides official navigation aid for the Coast Guard, Cleft of the Rock Lighthouse can be found south of Yachats on the northwest corner of the Cape Perpetua Scenic Area. While it is closed to the public, it can be viewed from Highway 101, near mile marker 166.

Umpqua River
Nearly identical in structure to Heceta Head, but a little taller, the Umpqua River Lighthouse is located near Winchester Bay.

Cape Arago
Closed to the public, Cape Arago is the third in a series of lighthouses to occupy this spot and is difficult to find, located just south to the entrance to Coos Bay.

Coquille River
Often called the Bandon Light, the Coquille River Lighthouse is staffed May through October and located just north of Bandon.

Pelican Bay
Closed to the public and standing 141 feet above the Chetco River in Brookings-Harbor, this is the youngest of Oregon’s lighthouses.

Finders Keepers Be on the lookout for the colorful twinkle of a hand-blown glass float when you’re exploring our beaches. As the name says, Finders Keepers! 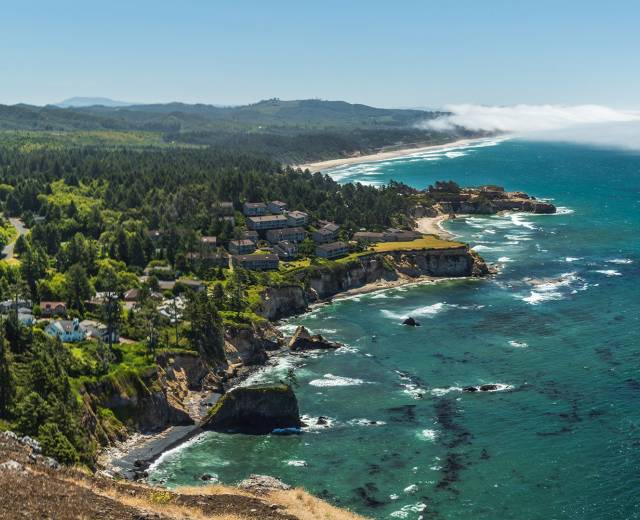 Scenic Drives & Viewpoints From gorgeous views of the coastline to beautiful hikes to pristine dunes—bring your camera and your sense of wonder to Lincoln City.

Top Central Coast Attractions The Heart of the Oregon Coast is famous for its historic railroads, cheese factories, glass artisans and, of course, its rugged beauty.